How Out-Of-State Students Can Get In-State Tuition

We hosted a free webinar on this topic on August 11, 2022. Watch the recording here.

The good news is there are ways around the high premiums of going out of state.  Before we get into this, though, let’s take a look at the basic qualifications for in-state tuition.

In general, trying to establish residency for in-state tuition is not worth the hassle. In the past, elaborate rules for in-state tuition qualification were established to safeguard taxpayer-subsidized public universities. These domicile rules vary by state, but here are a few general guidelines:

Again, these are basic guidelines. Make sure to go on the individual college’s website to verify its residency requirements.

A notable exception to residency rules: If one or both parents are in the military, many schools will offer a tuition waiver that allows the student to attend at in-state rates.

But what if you are not a resident? What are some ways to offset the high costs of out-of-state higher education?

While many popular public universities still slap out-of-state students with a large tuition premium, many public colleges in less populated areas (especially in the middle of the country) are eager for students and willing to cut good deals.

At some of these colleges, the total annual cost of attendance is less than $30,000 per year for non-residents. Ok, yes, that’s still a lot of money. But consider this: schools like The University of Virginia and The University of Michigan charge upwards of $30,000 just for in-state residents; for out-of-state students, the cost of attendance is closer to $70, 000. This means it can be cheaper in some cases for students to attend public schools out of state. Mind you, this is without considering any forms of financial aid.

Here’s a short and definitely not exhaustive list of well-known colleges with lower sticker prices for out-of-state residents.

All the schools listed have a graduation rate near or over 50%. 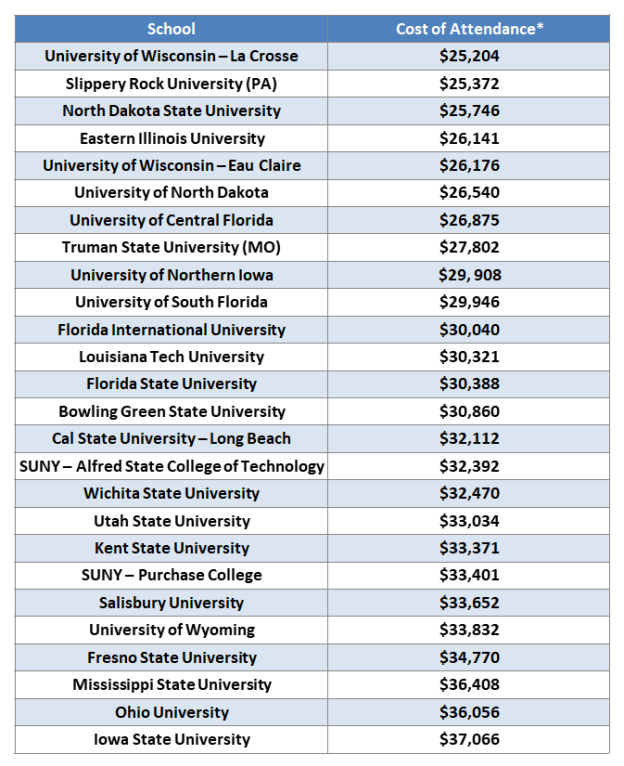 *Cost of Attendance is based on the estimated annual cost for non-resident, first-year students living on campus and taking the typical course load. These numbers only include direct costs and come from the college websites themselves as of July 26, 2022.

Remember, these are “sticker prices.” They are generic estimates of what you will pay (tuition, fees, room & board) without considering financial aid.

If you are applying to public out-of-state schools, financial aid will generally come in the form of non-resident merit scholarships/tuition discounts awarded by the school itself.

You will find that many of the schools listed above also give generous non-resident merit aid (even to average students).

Some big state schools are so eager to attract talented out-of-state students that they offer non-resident students merit scholarships and tuition waivers which may lower tuition to in-state rates. Oftentimes, school applicants are automatically awarded these merit scholarships based on their academic performance.

Besides general merit scholarships, some schools offer additional propositions. Texas A&M University will waive non-resident tuition if your child receives a competitive scholarship from them (college/departmental scholarship) of at least $4,000.

Important Tip: When searching for affordable out-of-state schools, you should know this: extremely competitive flagship state schools like UVA, UCLA, UNC, or the University of Michigan are only going to give merit aid to the best of the best students. They don’t need to throw money at the “above-average” students whose parents are already willing and able to pay for the prestige. These schools tend to save the merit scholarships for a select few and focus on helping students who demonstrate financial need.

Merit Aid for Students Who Are Not ‘Excellent’

Your child doesn’t have to be brilliant to receive merit aid from certain schools. Although this money may not bring down the cost to in-state rates, it will help make these schools much more affordable, and may even be cheaper than in-state schools.

A good rule of thumb is to look at regional schools and state universities that want to expand their “geographical footprint” and find more students with different backgrounds.

In just a few minutes, with the almighty power of Google, we found a few examples of regional schools known for large tuition discounting:

Additionally, many of the colleges we listed in the “low sticker price chart” above offer non-resident tuition discounting to average students.

What about bigger state universities?

The University of New Mexico offers the Amigo Scholarship, valued at over $16,000 a year if an out-of-state student achieves an ACT score of 23 and a 3.5 GPA OR a 26 ACT and 3.0 GPA. If you live in certain states nearby, you can qualify for in-state tuition with only a 3.0 GPA and a 20 ACT/1030 SAT through a regional exchange agreement, which we will further discuss in strategy #4.

At the University of Arkansas, the New Arkansan award waives 70 percent off out-of-state tuition for first-year students from neighboring states (Texas, Louisiana, Mississippi, Tennessee, Missouri, Kansas, and Oklahoma) who obtain at least a 3.2 GPA in high school.

Some schools waive out-of-state fees altogether for students who meet minimal qualifications, such as the University of Louisiana at Lafayette, which awards out-of-state tuition waivers to students with ACT scores of 20 or SAT scores of at least 1030, and GPAs of at least 2.5. UL Lafayette also offers more automatic scholarships based on academics that one can stack on top of this tuition waiver!

Consider whether going to an out-of-state school actually makes sense given your financial situation and your student’s academic/extracurricular record. For example, families with a low Expected Family Contribution may be better off focusing on in-state schools and private colleges that meet most or all of the family’s need. Don’t be put off by the exorbitant sticker prices of private colleges; they are more affordable than you think.

The Bottom Line: Many public universities are now offering good deals for out-of-state students to come to their college; deals that often require little additional effort on the student’s part. Please visit the “out-of-state” or “non-resident” scholarship web pages of colleges your child is interested in—you will find more details there.

Many schools offer discounted rates if you are a legacy student. At many of these schools, applicants automatically qualify if they demonstrate or maintain a certain GPA/test score and have a parent or grandparent who graduated from that school.

Parents, take a look at the website of the school you attended to see if they offer waivers for legacy students.

Here are a few:

Qualifications and requirements often change for these scholarships, so be sure to double-check each year. It’s especially important to do your research right now with so many schools going test-optional and adjusting their discounts and waivers accordingly.

Several regional agreements offer non-residents discounted tuition rates at out-of-state schools. There can be certain caveats, such as minimum GPA or test scores, and/or you must pursue an eligible degree.

The Western Undergraduate Exchange is available to students who reside in the following states and territories:

The Western Undergraduate Exchange allows students residing in these states to attend a college/university in the member states and only pay up to 150 percent of the in-state tuition rate.

There are strings attached of course.

Requirements: Whether you qualify for the tuition discount varies by school and the degree/program you wish to pursue. Individual schools may also have GPA and test score minimums to qualify.

Through the MSEP, public institutions agree to charge students no more than 150% of the in-state resident tuition rate for specific programs.

Requirements: Similar to the other exchange programs, not every college participates, and each college sets its own admission guidelines regarding academic performance and what specific degrees would merit the discount.

Requirements: Must be in an approved program or area of study; many colleges only allow eligibility if the student’s degree is not offered in their home state. There are over 1,200 eligible graduate and undergraduate degree programs at the 82 participating schools.

The Academic Common Market offers in-state rates to those students who want to pursue a degree that is not offered in their home state. It covers most of the South and Mid-Atlantic.

Requirements: The degree you want to pursue must NOT be available in your home state. Remember, only select colleges in the states listed participate, and those that do may set their own GPA and test score requirements.

You may have wondered if you could pick one of the eligible degrees and then just switch majors later on. Nope, if you switch you will be charged full out-of-state tuition. It is crucial to understand that you are locked into a specific program of study if you decide to use this tuition discount.

Several states have reciprocity agreements that go beyond the regional programs mentioned above and offer in-state rates. These agreements usually have less stringent qualifications. Here are some major ones: Missouri-Kansas, Wisconsin-Minnesota, New Mexico-Colorado, and Ohio-West Virginia.

Some schools will waive out-of-state tuition for people living in border counties, even if no reciprocity agreement exists. They may also waive non-resident tuition for specific border states for students who meet a certain academic benchmark.

Since Washington D.C. residents are limited in their public university options, DCTAG awards a $10,000 grant to help cover the cost of out-of-state schools. You can read more about it here.

Joining the service may be the last thing your student wants to do; it may also be something they have never thought about. Here are the five federal service academies:

The federal service academies provide excellent academics, life skills, and a guaranteed job without charging tuition, room, or board.

As in life, things are never so simple. In return, you will probably have to serve at least five years in the military. These schools are competitive, have more complicated application processes than your average college, and are certainly not for everyone. In fact, only The Coast Guard Academy does not require a congressional nomination to attend.

As discussed, these are the major ways to minimize out-of-state costs:

Ultimately, you and your child need to do your research. Maybe there’s a school you initially ruled out because you thought it was too expensive. Pore over the scholarships and financial aid pages for each college you’re interested in.

Investigate all options on each school’s website and/or call the school for a better explanation.

Leniency on cost will vary with each institution – even if there’s no state reciprocity program, some colleges will be more lenient if you live close to the border, have parent alumni, are a good student, or want to blaze your own path of study.

Never assume that you can’t negotiate a deal for yourself at any college. If you don’t try, you surely won’t succeed.

Have questions? Want to learn more? Check out the recording of the presentation we held on this topic on August 11, 2022. 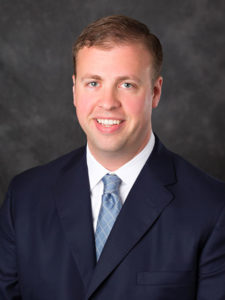 Consider Going Out of State for College

A Peek Behind the Curtain of College Pricing

Endowments: Finding Out Where the Money Is 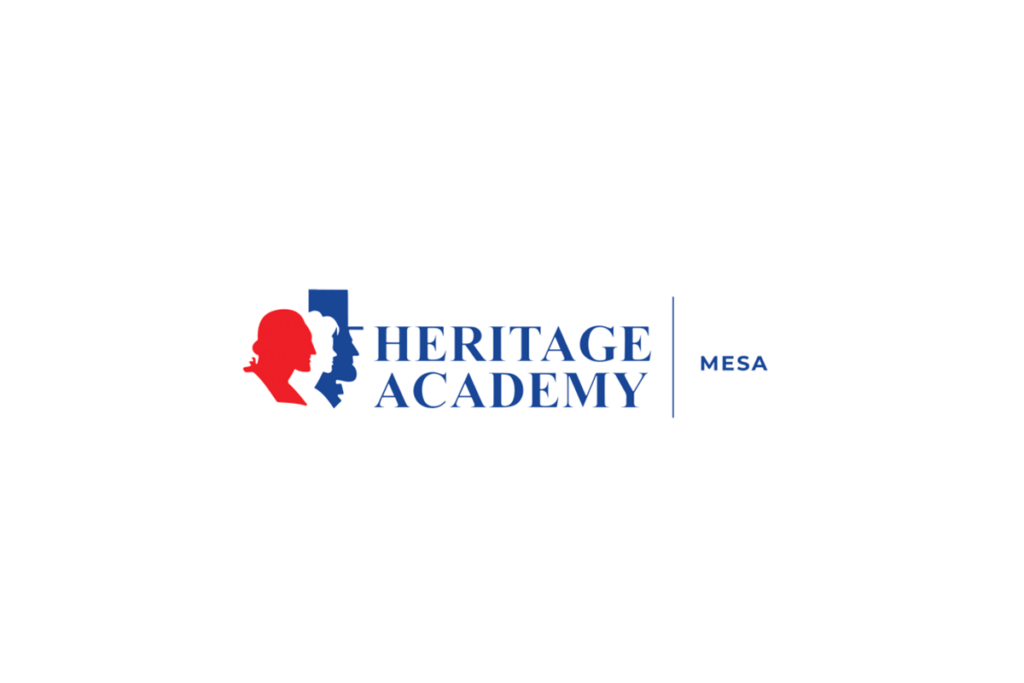